It's Friday, November 21, 7:00 AM and wintry (17 below) and we’re joining the local OHC and the Mine Mill workers at the Mine Mill office on Richard Lake. Destination; the health rally at Queen’s Park to demonstrate against the proposed cuts to Canada’s health system that is a precursor to privatizing our country’s health system. Harper and his minions are underfunding and convincing the Province’s liberal government that privatization is the way to go. How else will Harper realize the multi billion dollars required to pay for the tax cuts for his chosen corporations. Once again, another example of our elected officials not listening to their voters, particular that herd of cowardly conservative MPs, the sheeples who have chosen to serve the PM rather than their constituents or their country. 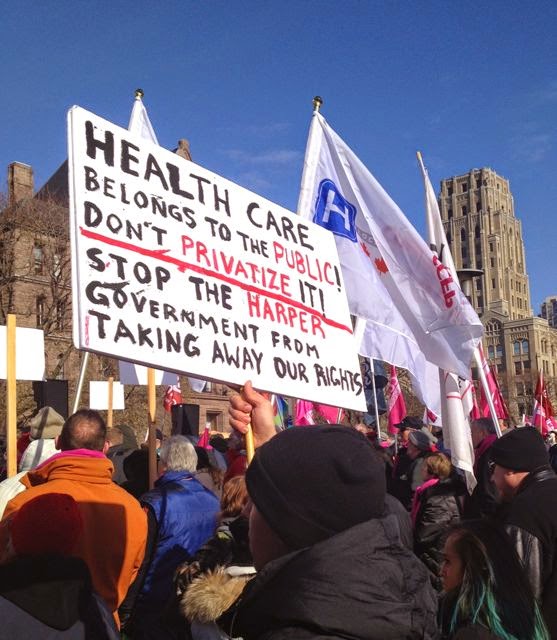 Impressively, the day ran smoothly. We hopped onto the coach type bus (thankfully, not a school bus), sat and snoozed in relative comfort among 35 passengers, witnessed the sunrise, stopped in Parry Sound for refreshments (for some, breakfast) and bused right up to the demonstration already under way. We hopped off the bus to be greeted by Council supporters and shown where our colleagues were among the crowd of approximately 1,700 people. After mounting our flag we shared the group experience with rousing speeches railing against the government misdirections, marched up and down part of Avenue Road to the beat of Latino drums and returned to Queen’s Park. About ten police officers stood in front of metal barricades separating the crowd from the building’s entrance and remained well behaved, presumably, to avoid a recurrence of the 2010 G-20 police riot. 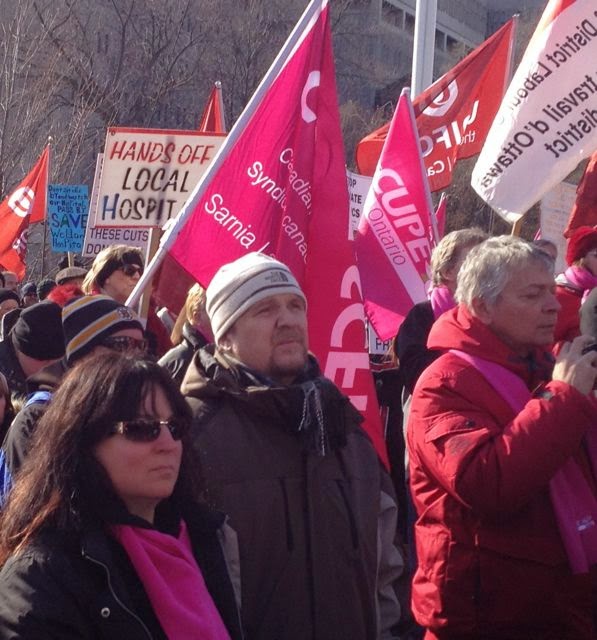 The speeches told of hospital closings, massive staff cut-backs and proliferating private clinics – all occurring without public consultation and in keeping with the hidden agenda of dismantling Canada’s health system – a system envied internationally and overshadowed by the health disaster propagated by the US power elite. Not enough Canadian citizens are taking notice of the shift, the slight of hand being unraveled by Harper. The voting public needs to realize the threat is real, that there is a hidden agenda and that the public, the voters and the citizens must compel our political parties to defeat this scheme. Otherwise, we are accepting the pathogenic health system of the US. And once that happens, it will be too late. It will be a done deal - until the likes of a Tommy Douglas can come along (and there are none on the immediate horizon). 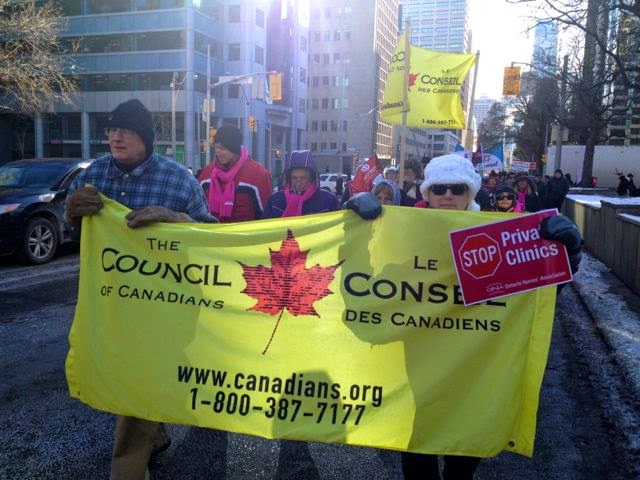 Then back to the bus as it rolled into the Queen’s Park parking lot and off to two stops on the way back to Sudbury. We were at Richard Lake by 7:40PM to notice the weather getting warmer and to make our ways home.

Many thanks to the OHC and Mine Mill that provided the organization and the free bus ride to this event.
Posted by The Council of Canadians Sudbury Chapter at 21:20

About the Sudbury Chapter